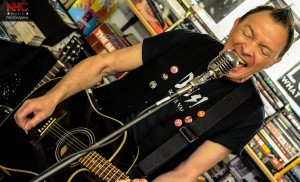 Miff Morris (photographer) attended an in-store session by Jonzip at NHC Music, Glasgow on Sunday 3rd May, and wrote: “Its unfortunate that I only captured the first three songs of Jon zips ( The Zips) performance as I had to make a move with my photography partner Darren & friends Meester & Kelly to travel over to Edinburgh’s Bannerman’s to catch The Eureka Machines live & direct, however the time I spend in the shop meant I had a brief encounter with Jon. I felt that I instantly connected with Jon as a person because he came across as being completely genuine, very cool, & effortlessly focused, I could tell his expression and musical sentiments ran deep. As Jon took to the microphone he began to explain a little about his bands history being a Glaswegian socio-politico-proto punk band who formed in the early seventies, split in the eighties & reformed on in the Nineties, due to European bootleg interest for their back catalogue, He spoke about the release of the Zip début single twenty-Seven years later, a single which had extensive play on the late John Peel Show & managed to fetch up to $427 on eBay, & was listed as number 37 in the top 100 most collectable punk records, of all time, in Record Collector. Now there is an achievement and a half! Jon’s affection & enjoyment for what the zips had created shone as he spoke & I could feel his gratitude & appreciation toward us for being there to embrace what he had to say & share with us within his musical expression. I only wished I could of stayed longer to embrace his full set of songs, but from what I caught, I was gripped, as he stood strumming captivating melodies & strong expressive lyrics from his current new album 19 forevva. A song in which I am glad I caught was about the battle of George Square called- 19 in 1919 its atmosphere resonated deep & left the room quiet after the final chord was struck. This song was about The Battle of George Square which saw up to 60,000 protesters – many of them from the working-class Red Clydeside movement – clash with police over working conditions, an occurance which happened ninety years ago. A major part of Scottish history I am sure the kids are not taught in school. I really hope he comes back one day to NHC to play us another fine set, the door is always open to him i am sure. You can catch Jon & the zips all over the Glasgow circuit this summer. They are most certainly a tremendous band to catch live. Keep up to date with future gig dates & musical endeavours on the following FB Page: https://www.facebook.com/thezipsuk/timeline & tune into their sounds direct here on the following bandcamp link: https://www.facebook.com/thezipsuk/app_178091127385″