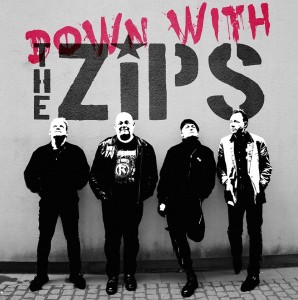 NEW ALBUM “DOWN WITH THE ZIPS”

Absolutely brilliant review of the new album, in this month’s Vive Le Rock!

With two self-released singles in late ’77, which now sell for silly money on a well-known auction site, The Zips have returned from self-imposed retirement these last few years to make up for lost time. This new album sees their ‘Zip City Rocker’ attitude in fine fettle and Jonzip McNeill’s songwriting ever more mature and sophisticated. A recently released solo EP saw Jon collaborate with two of The Mescaleros and this new album continues his fine vein of writing. ‘We Are All Berliners’ is a furious call to arms and ‘Over And Out’ sees Fred X get his Mick Jones on in fine style. The Zips have never claimed to be anything they’re not and that honesty and integrity shines through this sparkling set of songs. It’s good to have them back.